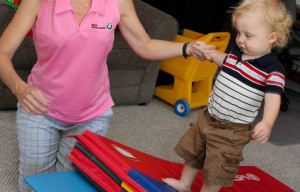 To a child, therapy may not sound fun. But when therapy is enjoyable, kids don’t even know they are working! At A Bright Start, Christina makes pediatric therapy feel like playtime. With activities and toys, Christina treats dozens of movement delays and disorders with early intervention and sensory integration.

“She’s not just an awesome therapist; she’s a mom,” says Brianne, whose son has gone to Christina for pediatric therapy since he was just four months old. “She knows how to make it enjoyable.”

Christina works hard to set a scene which calms nerves and encourages children to relax.

“It’s very settling for young kids to come see Christina,” says Brianne, who doesn’t tell her son when it’s time to attend therapy. “It’s time to go play at Christina’s!” she says instead. “He loves it. Christina plays music, sings songs, and plays games with him. They have fun.”

With extensive training in pediatric health, anatomy and physiology, psychology, and child development, Christina is thoroughly qualified to provide individualized care to any infant, child, or adolescent in need of physical therapy.

Above all, she loves children and their families.

“She always has the kids in mind,” says Brianne. “She even keeps an eye out for new equipment that will help my son.”

Christina also makes it a priority to continue her education and attends trainings throughout the year.

“She covers it all,” says Brianne. “She is very professional and very easy to talk to.”
Most important to Brianne, her son enjoys visiting Christina. “He looks forward to it. It’s more playing for him than working.”